After several years of trying to crack the code of the exact geometry of sound (music) and light, I finally did it tonight.

The below uses true 432Hz Pythagorean tuning. The symmetry is astounding and like so many other things about our universe, is incredibly beautiful.

This chart links together the harmonic relationships between notes in the chromatic scale. For example, a B(5) note following an A(5) is 1.0833 x 432hz = 468hz, which lands on 300 degrees (0.8333 of 360 degrees) on a circle. Whereby 360-60 degrees = 300 degrees, and 360/3 = 120 degrees and 180-120 = 60 degrees. Therefore, the B(5) 468hz creates a beautiful equilateral triangle (see angles in chart at 360 degrees, 300 degrees converging at Circle Center). All other regular polygonal geometry follows with again perfect symmetry. See the regular polygons inscribed both in the circle and off to the upper right side in their colors. Again, the placement of each of these is incredibly accurate in its placement despite the incredible complexity. You will also note that the seminal note of the Flower of Life (F#: 720hz) lands perfectly on the circle at 186.32 degrees, an astounding 0.0001 accurate to light speed as measured in a vacuum 186.28 x 10^3 miles per second. Whereas F# is a perfect 5th of C#.

There are “Gap Notes” between the notes B and C and just prior to the notes G# and A. The gaps appear just prior to the right angles forming the North-South and East-West Axis. (Incidentally, I believe these “gaps” are mirrored in our calendar bringing us to 365.24 days as an adjustment to the Egyptian 360 day calendar (with gap days at each Axis).

On the East-West axis, the gaps appear at Phi (where the first angle creates the upside down Pentagon at 255 degrees (180 degrees + 72 degrees, see orange) and extend above the West axis to 288 degrees. These are important “Phi” junctions-nodes that occur on both sides of the circle. I believe these relate to magnetism and electricity. Whereas the gaps at North and South relate to Radiation (south) and Gravitation (north) — let’s not forget the Templar Cross Prime Number Chart that informed us of this.

You will recognize numerical expressions that have appeared throughout the Etylmology of Number course curriculum (432, 864 and all notes having a digital root of 9 to match the geometry and their sum of angles which always sum to 9 in digital root).

Also, pls note the Legend in the center bottom which outlines all the angles of incidence and the reason they are where they are and how the shortening of the wave of sound/light (which increases hertz frequency) is proportionally correct both musically as well as geometrically.

I am very excited to have finally completed this effort and extremely grateful to be able to share it with you tonight. In the right hands, this knowledge has the potential to not only change our understanding of music and its relationship to geometry but with the right intentions I believe it possesses the capability to literally change the world.

I leave for Israel and Egypt this week…very excited to be going back after seven months.

One last thing…yesterday, I bought a laser measuring device to use in the Great Pyramid (Alan Green (Shakespeare and Pyramid Code) asked me to measure a few things while there in May that he was curious about. I thought I would try it out in my house first to see how it works. 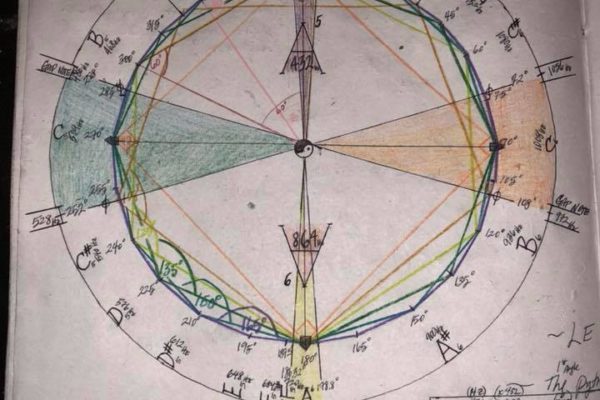 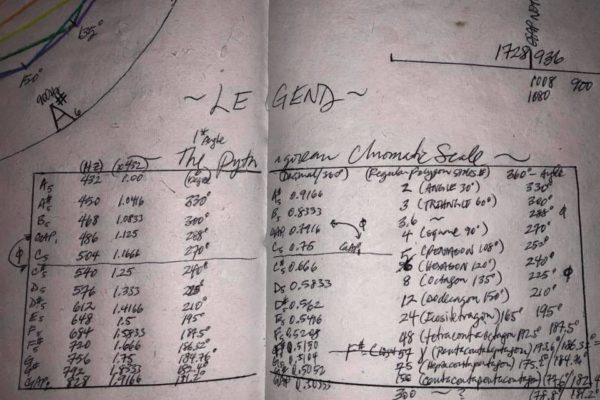